A guest blog from The Dramble, first published 03 June 2019

Moonshine is traditionally so named because it tends to be manufactured late into the evening without the assistance of artificial light sources – just the illumination of the moon with which to operate an illicit still, hidden away from prying eyes – and particularly the tax man. In Poland, moonshine is known under several monikers – Samogon, duch puszczy, or księżycówka or simply Bimber. A near mythical high proof spirit that has been produced in the country since the 19th Century, and is said to not cause a hangover. Drawing its name from this tradition, equally hidden away (though this time in a West London industrial estate), and operated much more legally is Bimber Distillery – who’s single malt whisky reached three years of maturity last week.

The distillery (which was founded in 2015 with its first casks of spirit laid down on 26th May 2016) was far from the first to offer bottles of its developing spirit for both sale and sampling. In doing so it has added to the ongoing heated debate that surrounds the pricing structures of distilleries offering immature spirits and young whiskies – a growth area over the last 5 years, which may have already blown it’s own bottom out – a raft of fledgling distilleries mining it too quickly and too deeply. The Bimber team seem to have sensed that this odd peak in demand and market conditions may well have already passed, and have wisely revisited their customer offering for the advent of their three years spirit anniversary. 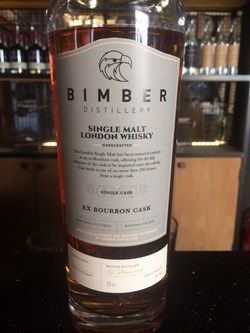 Bimber’s Founder’s Club (which is in effect an advance subscription service) stands in stark contrast to the distillery’s initial liquid offerings – at £395 the package provides a range of membership benefits along with a bottle of whisky each year (from December 2019) for four years. A mere 12 months ago, the distillery were offering 2 year old spirit for twice the bottle price offered here. Bimber have been highly active on the UK festival circuit, generating a palpable buzz around the quality of their make and their passion for quality spirit production. They’ve set the bar for the expectations of the distillery extraordinarily high. But, to my mind there’s an equilibrium to be achieved between generating revenue, and ensuring a price-point which doesn’t alienate a huge swathe of your market. It’s therefore pleasing to see some common-sense with their pricing starting to emerge. It’s clearly not just the spirit that’s been maturing.

Timing is everything, so it was perhaps particularly fortunate happenstance that my visit to Bimber came mere days after the advent of their three years of maturity. 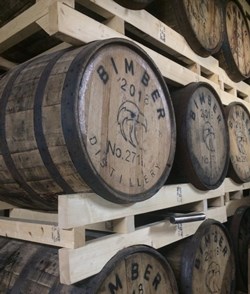 It’s fair to describe the exterior of the distillery as exceedingly unassuming – in essence no different to the other units (car garages, good depots and fabricators) located just off the A40 in a small industrial estate. There’s been many an article about whisky tourism recently, and for Bimber this facet is as equally important for the distillery’s profile as it is for the adding to the coffers. However, whilst the distillery is only a short stroll from North Acton Underground station, the site’s location, means that passing trade for tours is simply non-existent. Bimber need to promote their distillery as a ‘location’ and a venue in order to continue to generate the pipeline of interest required to sustain its longer term development and viability.

Once inside the distillery, the setup is immediately captivating –  it’s active and attractively authentic – the space split between bar area, production area and cask storage (which is rapidly running out). Indeed, it’s quite remarkable how much ‘stuff’ Bimber have managed to cram into their space without it ever feeling overly cramped or not fit for purpose. Here, every facet of the operation is laid bare – and as a visitor, there’s a wonderful feeling of being up close and personal with all aspects of both production and maturation.

Equipment wise, things are small scale – but fascinating. A 250kg mash tun, sits at one end of the distillery floor whilst at the other – three open topped wooden washbacks – which were constructed by distillery Co-Founder and Manager Dariusz Plazewski – a third generation Polish bootlegger who emigrated to London in 2003. The distillery’s site means it’s subjected to warm temperatures during the summer (particularly near the ceiling) and also to a high degree of fluctuation throughout the year. The open washbacks (which Dariusz describes as ‘a little bit dirty’ in terms of their accumulation of yeast and a low-touch cleaning regime) are cooled by industrial aircon units. It’s a smart solution to temp variance throughout the height of a wash and one which results in a particularly long ferment (5-6 days) and a highly estery (~10% ABV) wash ready for distillation. 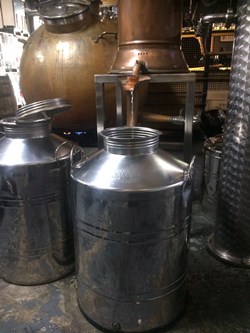 The stills take the ethos of bathtub alemics and scale this up considerable. A direct fired Portuguese wash still has a capacity of 1000 litres (bigger than most I’ve seen at smaller sites), whilst the spirit still produces make at around 70% ABV from its 600 litre capacity. There’s also a reasonably tall column still which Bimber are utilising for a range of other spirits – rum, and a newly released tea influence gin – ‘Da Hong Pao’. As you can imagine when working at this scale – a run doesn’t even fill a single 250L standard barrel, yet alone a raft of refill ex-bourbon casks. As such, the volume of casks that Bimber possesses is a fraction compared to what you might see at an established Scottish site. And yet, they’re already floor to ceiling and running out of racking space – Sales Director Farid Shawish informed me that Bimber were considering moving 100 or so casks off site to continue their maturation. Operating at small scale presents issues which larger distilleries usually don’t have to think about for a number of years.

Cask filling is currently into a combination of US ex-bourbon, ex-sherry, and virgin oak (indeed, it’s these three cask types which currently make up the what Bimber are calling their ‘Signature style’). However, Dariusz has also been acquiring a range of experimental casks with different precursor liquids and sizes. First hand – some of these are very interesting indeed. 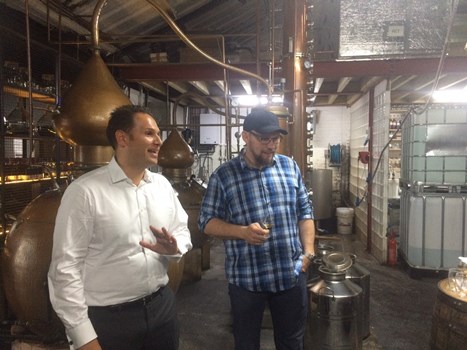 During my time at Bimber, it became clear that the next 12-18 months are a vital point in time for the distillery. Whilst they’ve set high expectations with their light, estery and well-made spirit, the world has not yet tasted any released Bimber whisky at three years of age. This is the point where important decisions need to be made. What will be the distillery’s first release? What style? From what casks? And at what price?

Pleasingly, it seems that Bimber are not simply going to bottle up their very first run of straight ex-bourbon casks and offer them out at a huge premium – so many other young English distilleries have taken this route, and to my mind there’s only so much longer term market space for this type of approach. Dariusz and Farid were genuinely interested in my feedback on the developing array of spirits – looking for guidance as to which styles would work for different approaches and customers. To my mind, they certainly possess the depth of cask quality to be able to produce a cohesive and appealing first release that moves away from the templated ex-bourbon at three years – however, some of the casks are unsurprisingly not ready, and whilst interesting will undoubtedly offer a more complete experience further down the road.

So, by now those of you who have previously tasted Bimber’s spirit are no doubt wondering how it has developed during its 3rd year of maturation onto being legally single malt whisky. I’m of the view that it would be inappropriate for The Dramble to review the selection of cask samples we were provided before giving the distillery an opportunity to release its initial offering to the market. However, what I will do is ponder how each of the three main cask types which make up the Bimber ‘Signature’ expression (ex-bournbon, ex-sherry and virgin oak) have developed from 2 years through to 3 years of age. I knew saving my set of spirit samples would come in handy!

For each of these, I’ve diluted the younger sample to level its ABV to a point where it’s a similar strength of the older sample, and thus a fairer comparison. Rest assured, in the future, The Dramble will be bringing you full reviews of Bimber’s early release – but for the time being, we’ll let the distillery map out their opening salvo of London single malt whisky. First things first. 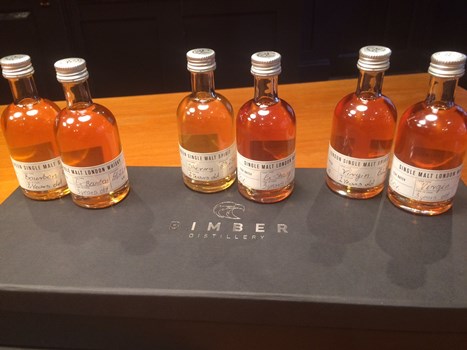 Ex-bourbon 2 year old  63.3% / Ex-bourbon 3 year old 51.2%
The additional year of maturation has added both greater expressiveness and fuller integration to the ex-bourbon Bimber. Apple pastries, crumble mix and biscuits at 2 year old, whilst pear juice, freshly picked apricots, charred wood and pepperiness are added into the equation at 3 years of age. There’s more development – with a richer, fuller mouthfeel and longer finish. Copper contact has been reduced and the whilst the esteryness remains, it’s now less youthful (intensely sugar coated) and much more fully formed with the integration of oak and spices from the cask. A solid expression that’s notionally ready to go right now – but of course will greatly improve in depth and complexity with additional time.

Ex-sherry 2 year old 63.2% / Ex-sherry 3 year old  51.9%
The colour difference between the samples is at its greatest here with a much deeper hue from an additional year of maturation. The apple, berry and sherry character is very similar in both, but at 3 years, the natural sweetness from the oloroso and the cask sugars is added to both the nose and the palate. Despite this, again the integration above all else feels like it’s the main beneficiary of the maturation process – the arrival has become softer and less biting, and the spicing from the wood and sherry is starting to assimilate within the liquid. That said, to my palate, the balance between the wood and spirit is not yet anywhere near its peak – particularly in the finish where things get rather balsa / pencil shavings. More time is certainly required here – there’s an equilibrium, and likewise a fine line that results from patience and careful observation when dealign with single casks – to my mind Bimber’s needs a few more years in oloroso to be considered a finished article in its own right.

Virgin oak 2 year old 62.3% / Virgin oak 3 year old 53.1%
The whisky is so much more expressive than the 2 year old spirit – which gets there, but takes a little time to open up with resting. There’s a lot more fruit on the nose of the 3 year old – apple and pear drop sweets. It’s simply both brighter and more pronounced. Similarly to the other cask types, the additional of year of maturation has greatly increased the integration – there’s a lot less jagged and punchy cask spicing, and a lot more wood harmony. The profile is largely the same, but the experience feels both elongated and ‘smoother’. Despite not usually favouring virgin casks (and their abundance of wood), of the six Bimber samples I’ve worked through, this one feels the most compelling profile at this level of maturity. It’s both characterful and very in tune with Bimber’s long ferment, slow distillation, high estery style. 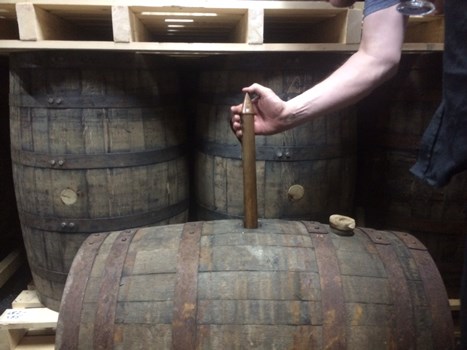 The Dramble is a growing independent website run by a group of passionate whisky enthusiasts. The site presents straightforward and genuine evaluations of all types of whiskies, as well as regular features and interviews that explore the rich tapestry of the vibrant whisky world.

Find out more about The Dramble and it’s writers here.

previous
Love Whisky? Join the Club! What makes the perfect drinks subscription?
next
An interview with Glencairn