In 2007 it all started with curiosity and the impetus to try, trial and taste. We have arguably some of the best red wine barrels in the world in our ‘backyard’ and with the quality of ingredients and materials available within a day’s drive from Melbourne, we tried something new and never looked back.

Growing up in Melbourne, in a big Italian family David has always been food obsessed without ever getting too serious or formal about it. He wanted to make a whisky which feels right at home for those moments spent around the dinner table.

Starward make modern, progressive whiskies that speak to the place they’re made – Melbourne. As an acclaimed foodie capital, and a city surrounded by some of Australia’s leading wine regions, Starward is the culmination of a drive and determination to capture the essence of Melbourne and Australia in a bottle. 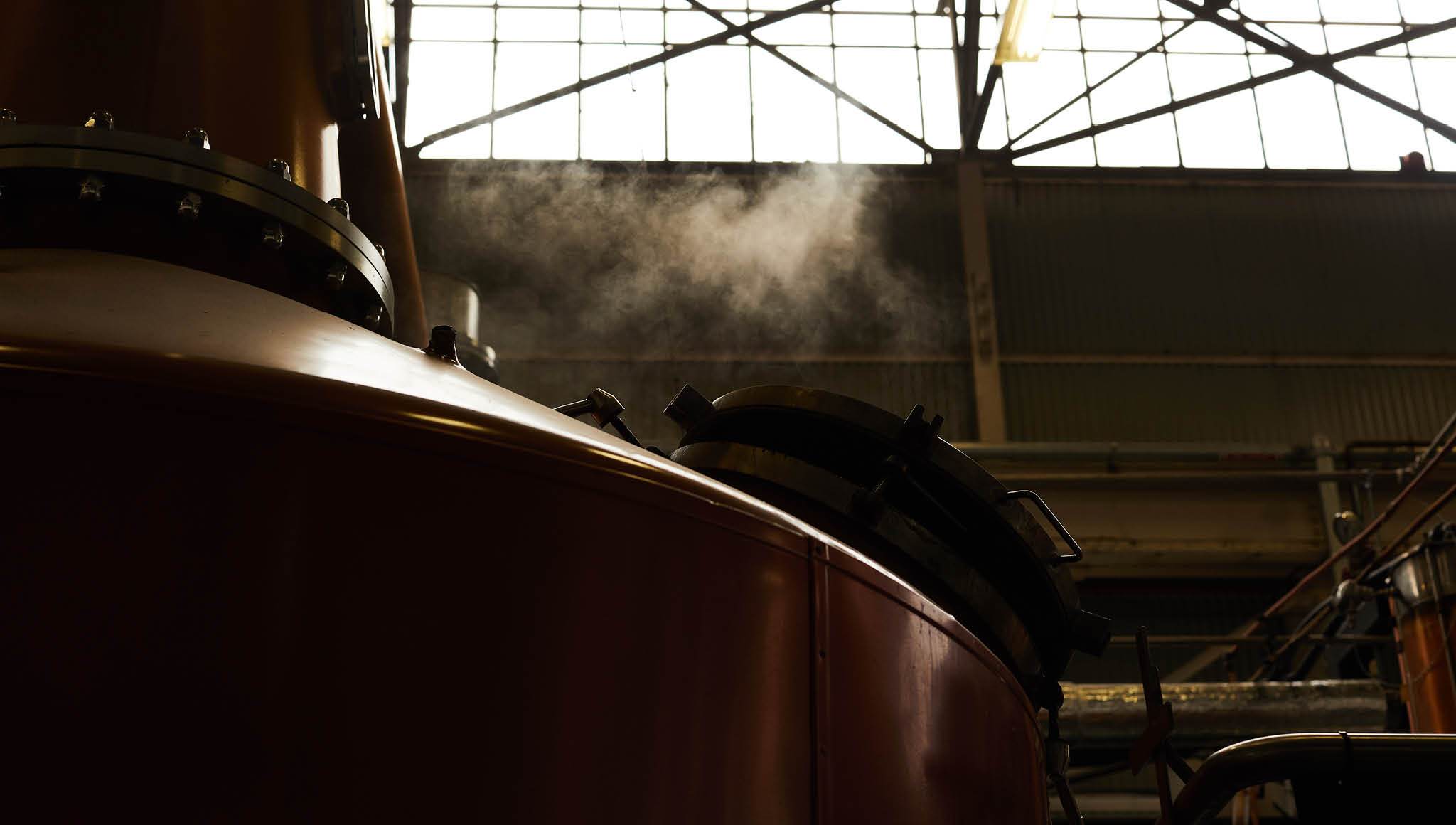 All our ingredients are sourced from within a day’s drive from of our distillery, we mature in barrels from Australia’s famed wine regions and we harness Melbourne’s ‘four seasons in a day weather’ to make the epitome of a distinctly Australian spirit. Over the last few years Starward has expanded globally, launching an international presence with distribution in Australia, United States, Japan, United Kingdom, France, Austria, Germany, Netherlands, Italy and Singapore. Through driving distribution in these key markets, Starward is leading the way for Australian Whisky around the world. 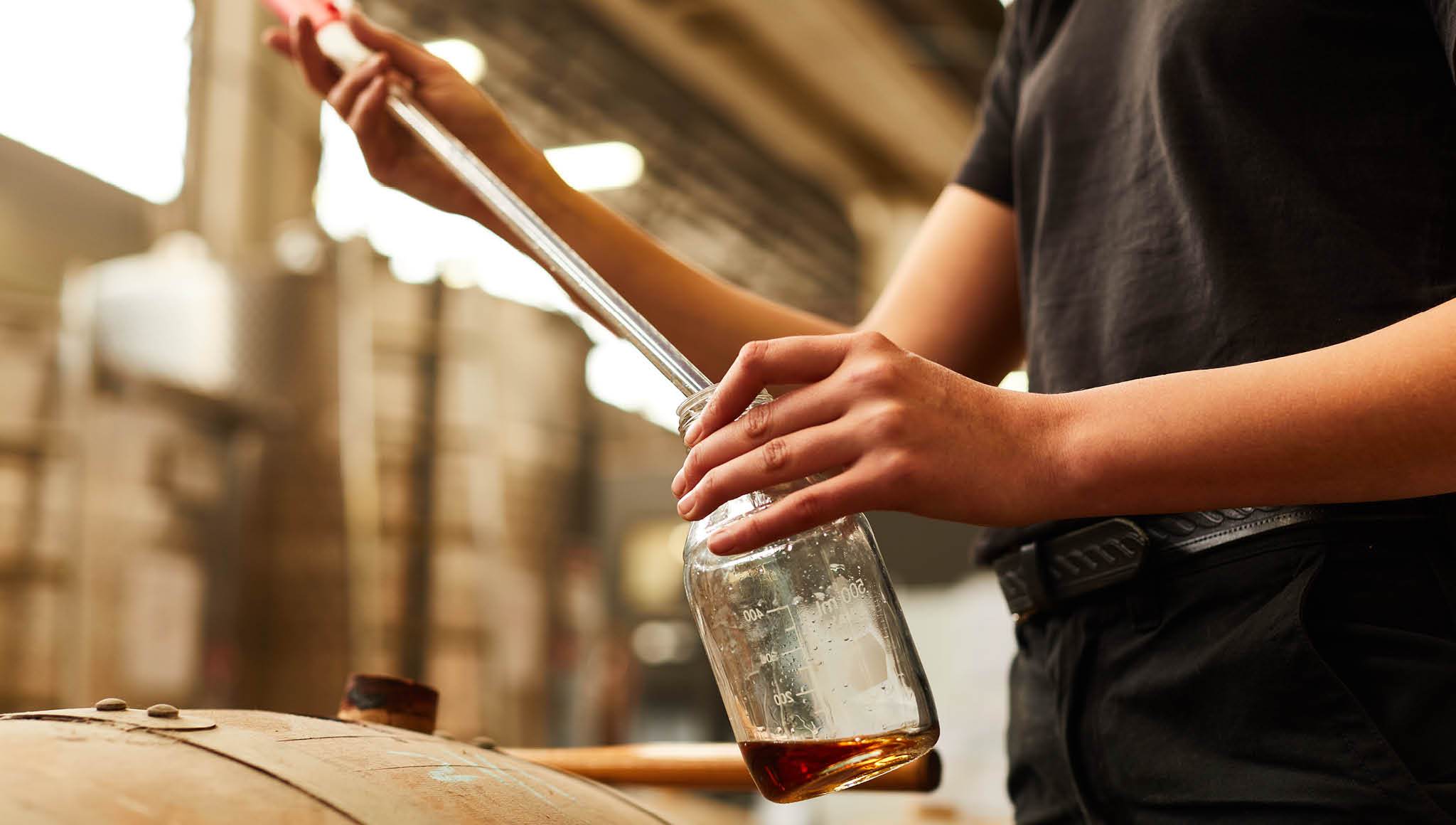 THE BEST THING TO COME FROM A RED WINE BARREL

Much of Starward’s flavour and all the reddish colour comes from our choice of maturation vessel: red wine barrels. We source our barrels from the leading Australian wineries right in our backyard. Australian winemakers have championed innovation for decades. As a new world whisky, we knew using these iconic barrels would create an iconic whisky too. We typically use shiraz, cabernet and pinot noir barrels that have spent four to seven years at a winery.

To keep the fresh red wine taste profile, we source these barrels hours after they’re emptied in the nearby Yarra Valley and Barossa Valley. Then, they’re lightly charred or steamed. Often, the barrels are still wet with wine when we fill them, giving our whisky its bold, fruity flavour. Given the low ABV content of wine, the barrels still have plenty of oak character to offer the spirit in comparison to re-coopered ex-whisky barrels. 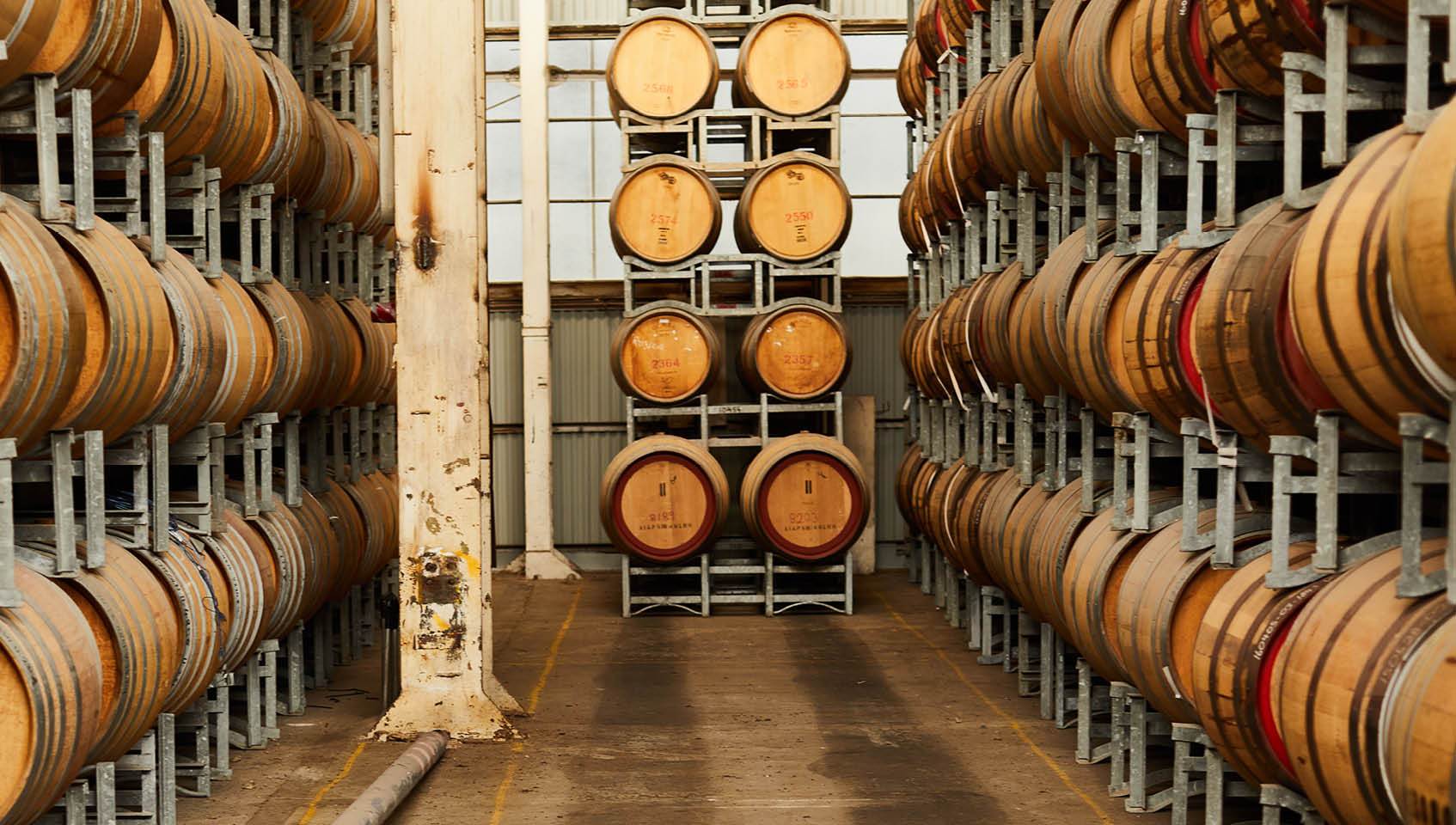 They’re also infused with ‘big Aussie red’ tannins and sweet and savoury wine character. The combination of oak with wine flavours creates a distinctive whisky which is reflective of Starward provenance. And in our view, it makes the quintessential Australian whisky. Our barrels don’t ‘rest’ in the bond store. In fact, we think they’re the hardest working barrels in the world.The temperature in Melbourne can fluctuate up to 20°C within a single day in summer months.

Even during our cooler winter months, our barrels work just as hard as barrels at the height of Scottish summer. Large temperature changes stimulate greater interaction between spirit and wood. This creates more flavour and aroma extraction and a rich whisky maturing in just a few years. We use different barrel sizes, with different volume to surface area ratios. This wide range of depth and complexity leads to a more balanced whisky.

Melbourne is also significantly dryer than northern hemisphere regions. Water evaporates faster than alcohol, leading our barrels to increase ABV rather than a more traditional decrease. There’s no formula for how long a barrel whisky needs to mature. Our team decides when the whisky is ready. We tend to find around three years is just right for Melbourne. 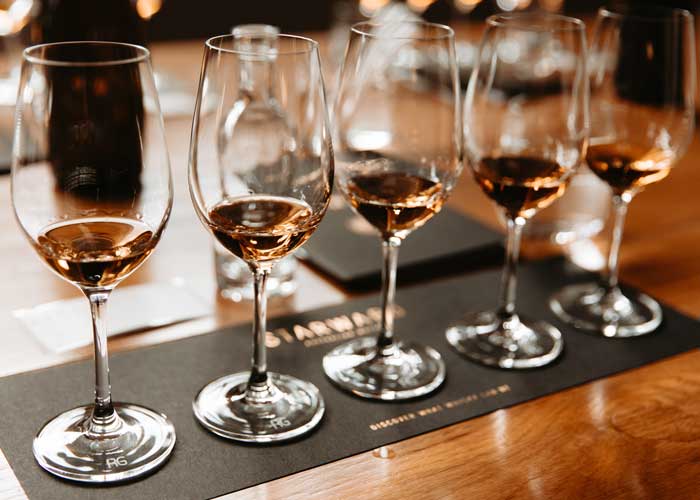 Starward’s core range of whiskies: Left-Field, Nova, Solera and Fortis, is a journey into our distinctive Australian spirit and the possibilities for New World whisky.

Each whisky has the Starward stamp from our Australian wine barrel maturation, yet each whisky differs and offers something new. From single malt to double grain, American or French oak influences or approachability and complexity. There’s a whisky for every drinker.

Starward’s extended range is where our distillers really let their creativity flow. Home to some of our experiments, trials and most interesting barrels including bottled cocktails, Single Barrel releases and Starward Projects. Our extended range is a fantastic representation of what it means to be an Australian whisky maker… the sky isn’t the limit, the stars are.

Starward burst onto the competition scene in 2013 and was instantly recognised for its bold spirit and flavour, leading it to become what is now the fastest growing Australian whisky brand.

Over the years Starward whiskies have been awarded and lauded on the global stage. 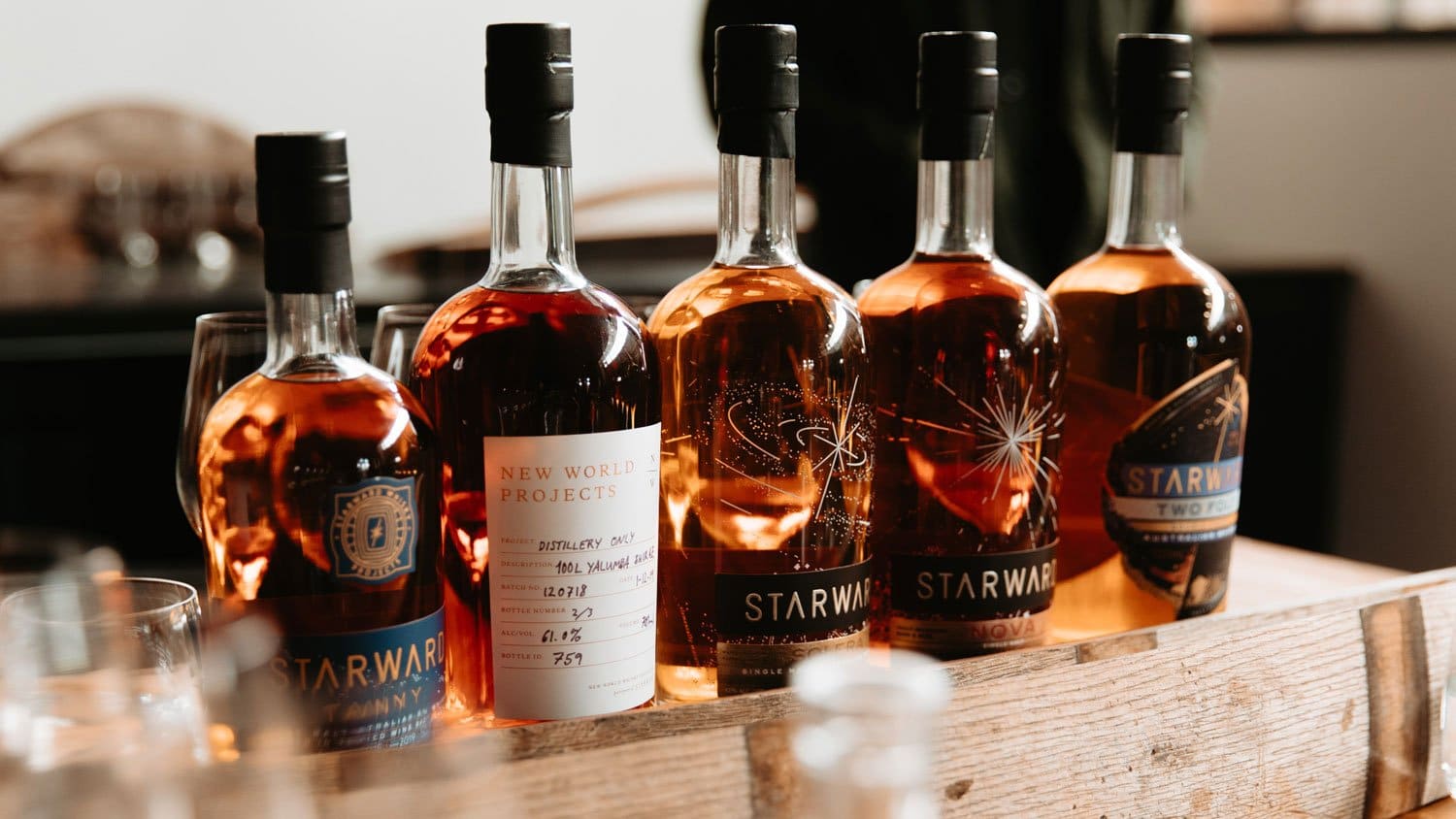