The Cotswolds Distillery was founded in 2014 by Dan Szor. A native New Yorker, Dan had been working in finance in London and spending his weekends with his family in the Cotswolds. He had been looking for a new direction that would let him move permanently to the countryside and do something he was passionate about. 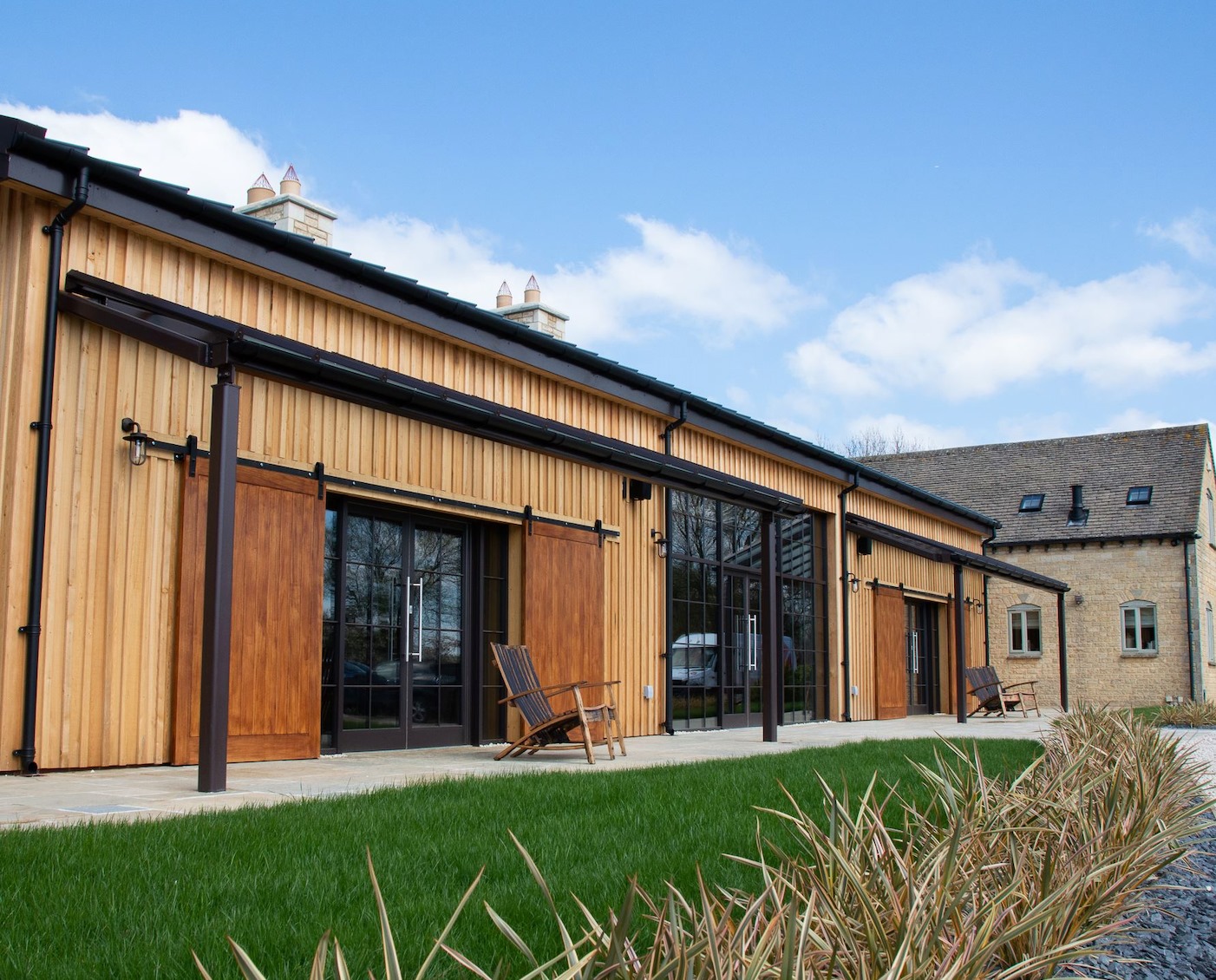 A dedicated whisky fan, Dan saw the fields of golden barley around his house in the Cotswolds and had a brainwave “I suddenly thought, there’s barley all over the Cotswolds and nobody’s distilling it, let’s be the first!” Production began in September 2014, just a few months after the distillery was commissioned.

Since then, we have produced a number of different spirits and liqueurs, from absinthe to a rye whisky, whilst also steadily increasing production of our Cotswolds Single Malt Whisky and the award-winning Cotswolds Dry Gin. It has been an incredible journey so far, and we are looking forward to many years ahead producing our Outstanding Natural Spirits. 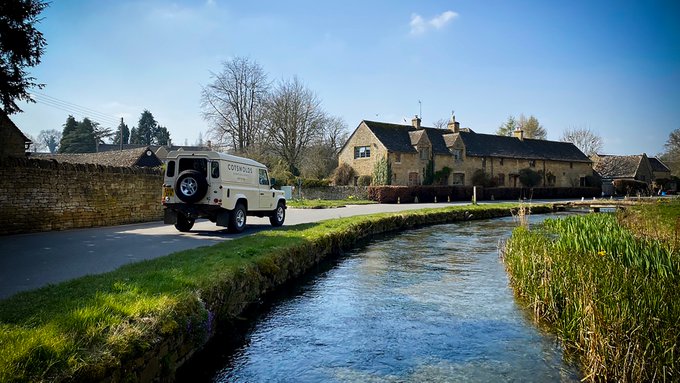 The first whisky ever to be distilled in the Cotswolds Area of Outstanding Natural Beauty, the Cotswolds Single Malt Whisky is a rich and fruity single malt. It has been bottled non-chill filtered and at its natural colour, at 46% ABV. Made from 100% locally grown, floor-malted barley, the distillers have used long fermentations, unusual yeast strains and innovative distillation cuts to achieve a spirit that is smooth, fruity, and balanced. It has been matured in first-fill ex-Bourbon casks from Kentucky and reconditioned shaved, toasted and re-charred (STR) red wine casks, giving it an incredible maturity and depth of flavour in a whisky so young. 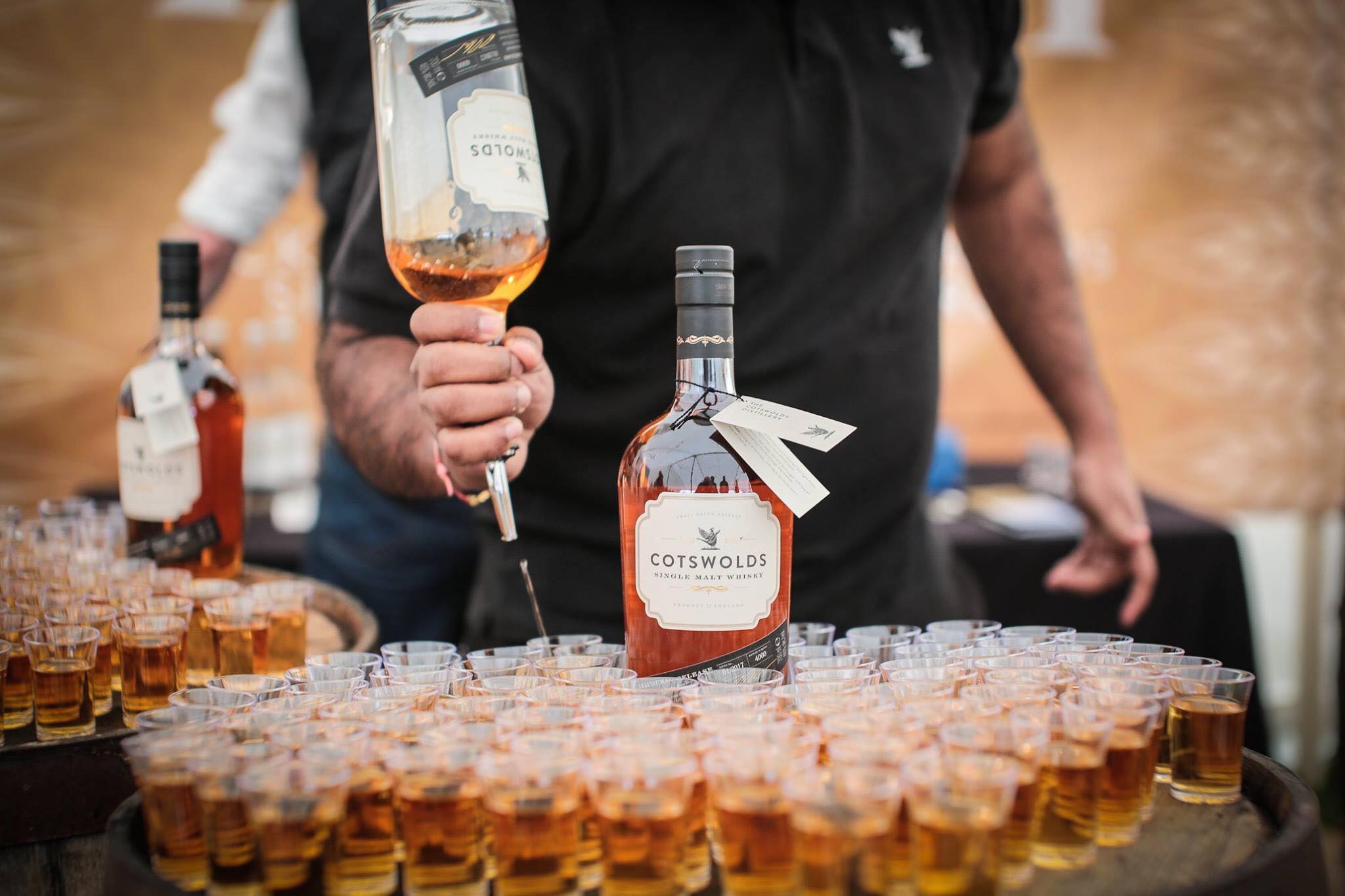 From farm to bottle

We begin at the farm. Right from the start, we are committed to using only local barley – all the barley that will ever go into our whiskies will have been grown here in the Cotswolds. And each bottle will state the farm it originated from on the label.

The harvested barley heads to the maltings at Warminster, Britain’s oldest working maltings. Using the same techniques they’ve used for hundreds of years, the maltmen steep the barley, before turning it on the malting floors by hand for several days. 100% of the malt we use is traditionally floor-malted. The final step is to kiln dry the malt and then send it up to us at the distillery. 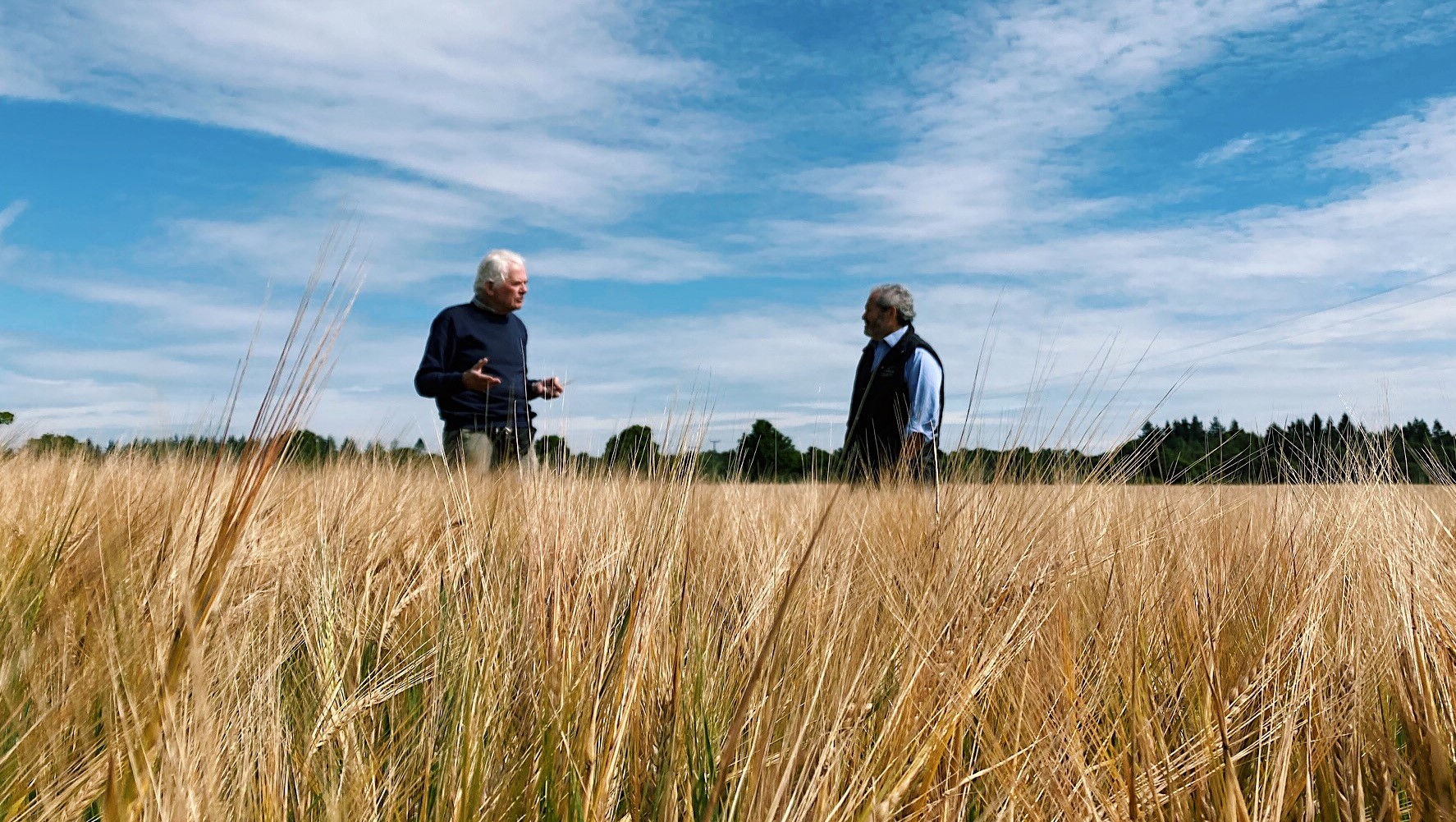 First thing in the morning we get started grinding up the malt in our mill, so that we can extract the fuel inside it more easily. The ground-up malt, known as grist, falls directly into our 0.5 tonne mash tun where we mix it with hot water in three stages. The heat of the water triggers reactions in the malt that release its sugars into the water, turning it into wort.

We run the wort off into one of our 8 steel washbacks, collecting 2,500 litres from one mash. We then add two strains of dried yeast. These were selected not just for their consistent yields but more importantly, for the excellent flavours they produce. This live yeast will turn the sugars in the worts into alcohol. We let this fermentation continue for just over 90 hours – this is considerably longer than the average fermentation length in whisky production. In the first two days of the process, the yeast works hard to produce alcohol and the wash will reach a peak of about 8% ABV. After that however, no more alcohol will be made, so most distilleries finish their fermentation there. But if left to continue for a third and fourth day, a secondary stage takes place in which the wash fills with bacteria. Although it makes it look and smell rather odd, we want this to happen – the bacteria produce acid, which combines with alcohol to form fruity flavour compounds called esters.

This was one of Dr Jim Swan’s masterstrokes – making sure that the wash was loaded with esters that would give our spirit a fantastic fruity complexity. 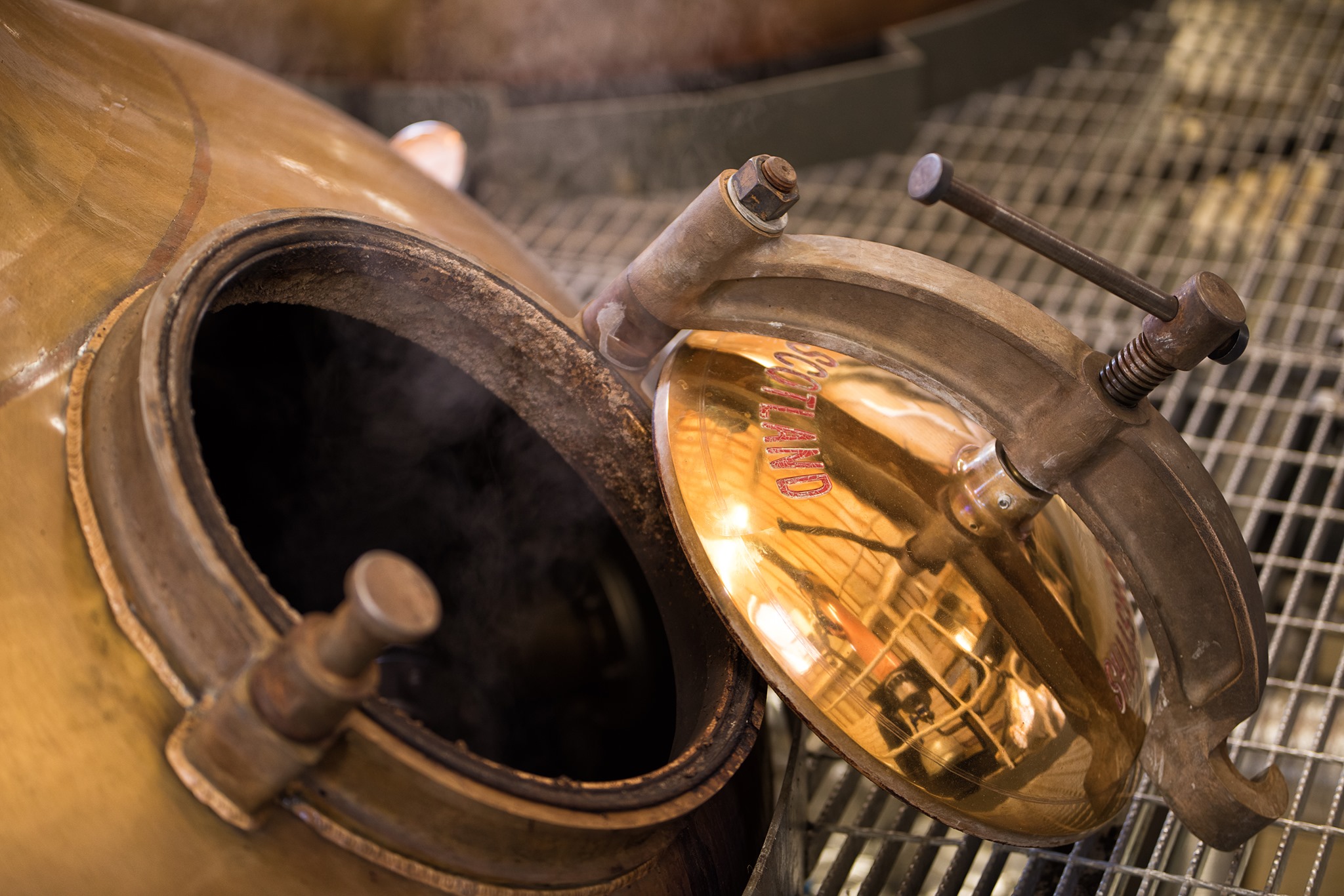 On day 5, we’re ready to start distilling and the first step in our double distillation process is the wash still – otherwise known as Mary. She’s a 2500-litre copper pot still, made for us by Forsyths in Rothes. By boiling the fermented wash for several hours we can collect the Low Wines; liquid containing all the alcohol and flavour compounds from the wash.

We then need to pick out the best bits from the Low Wines – only these will make it into the spirit and become whisky. To do this, we distil the Low Wines in the second still: our 1600-litre spirit still, Janis. The first liquid to run off the stills is the harsh ‘foreshots’, which are set aside. These are followed by the ‘heart’ of the run – our future whisky, which is collected for only a couple of hours before the spirit flowing off the still becomes heavier and oilier. This is the final section, called the ‘feints’ and this is also set aside. 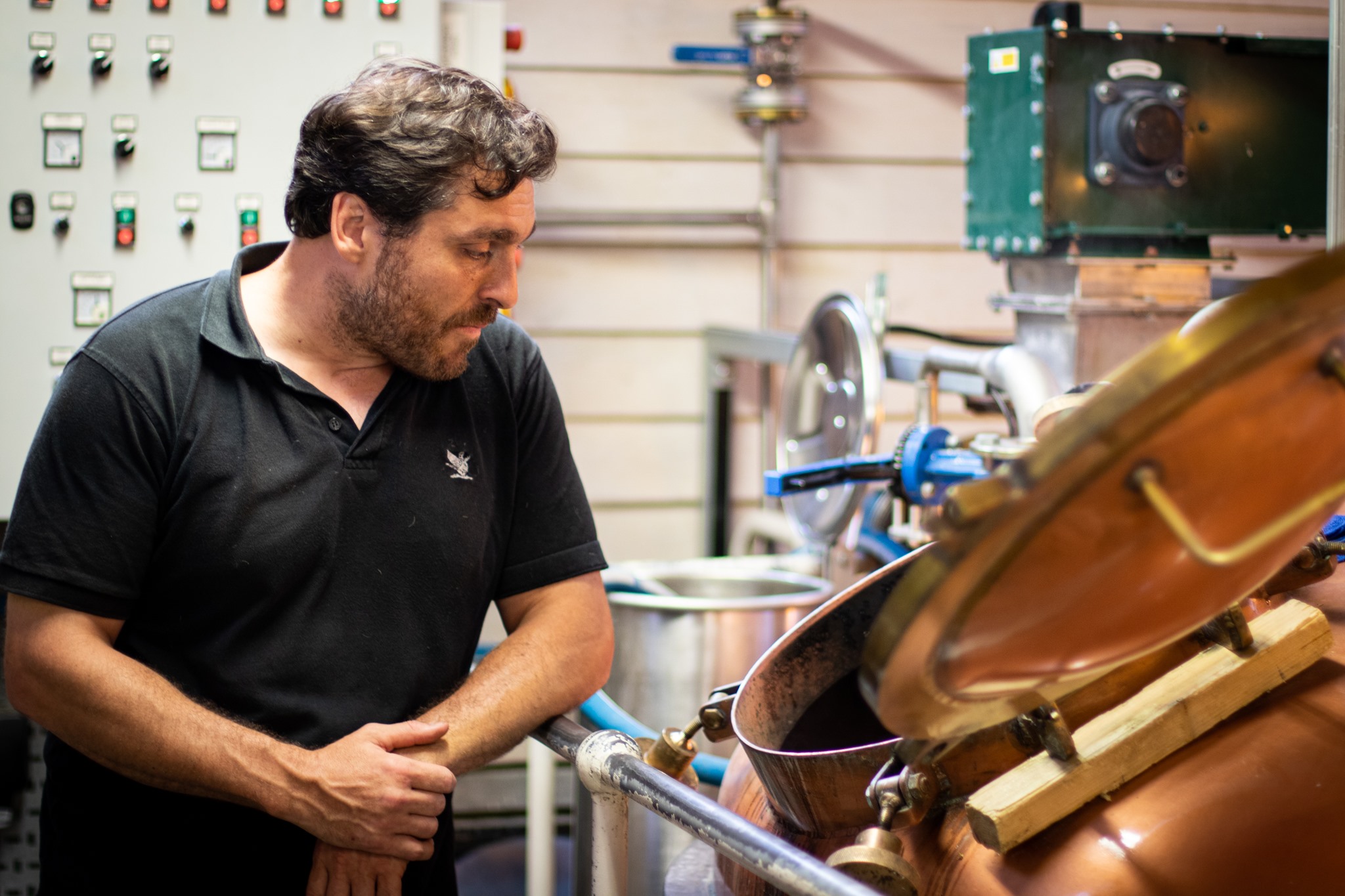 Our cut points (the moment we switch from foreshots > hearts > feints) are also quite unusual. The fruity esters created during fermentation will appear very early on in the distillation, so in order to capture them in our spirit we make sure we switch from foreshots to hearts after only a few minutes. The cut to feints also happens sooner than it usually would – this means that none of the heavier, rougher compounds that come through towards the end will make it into our spirit.

The heart cut, a colourless and fruity spirit, is known as new make spirit, and it is at 75% ABV. Thanks to our unusual fermentation and cut points it is already smooth enough to drink and full of flavour, not all that different to a grappa or eau de vie. We reduce this to 63.5% by adding demineralised water, and then it is ready to be casked. We fill the spirit into an oak cask, and then place it in the warehouse, where it will rest for a minimum of three years and one day, but potentially longer. 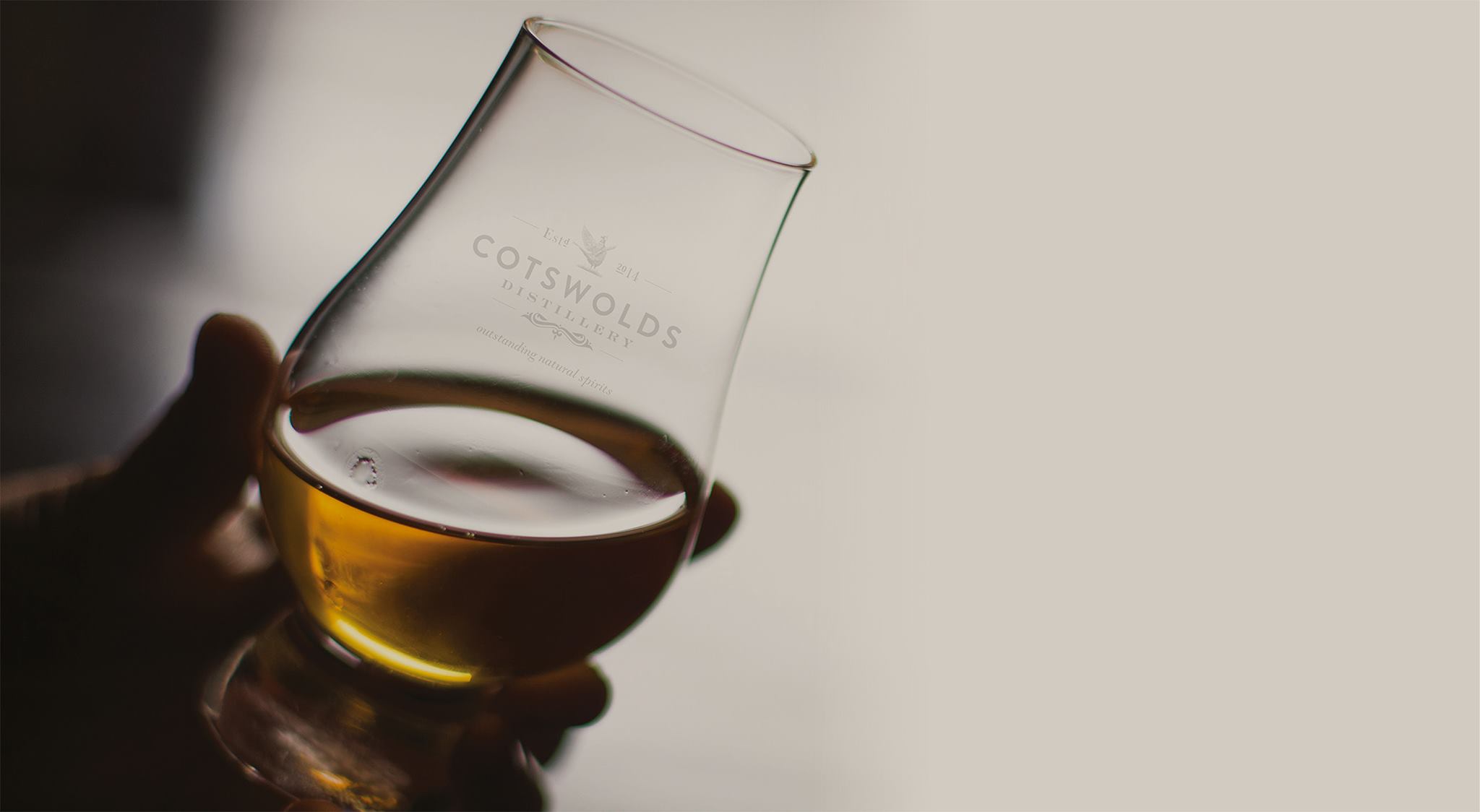 Over time the spirit will mellow and smooth out, and flavours and colours will be drawn out of the wood. We are filling a range of different types of cask and these will all produce different tasting whiskies. Once mature, several casks will be selected to be blended together in a batch, with each cask introducing different characteristics. The whisky is then reduced to its bottling strength of 46% and bottled here by hand at the distillery. 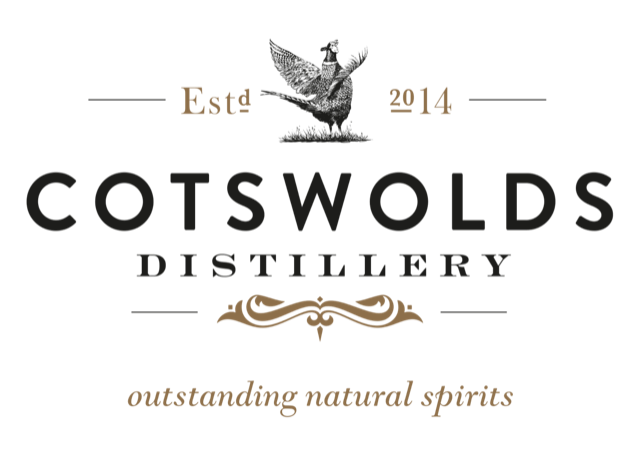 Green’s and Henson Farms in the Cotswolds