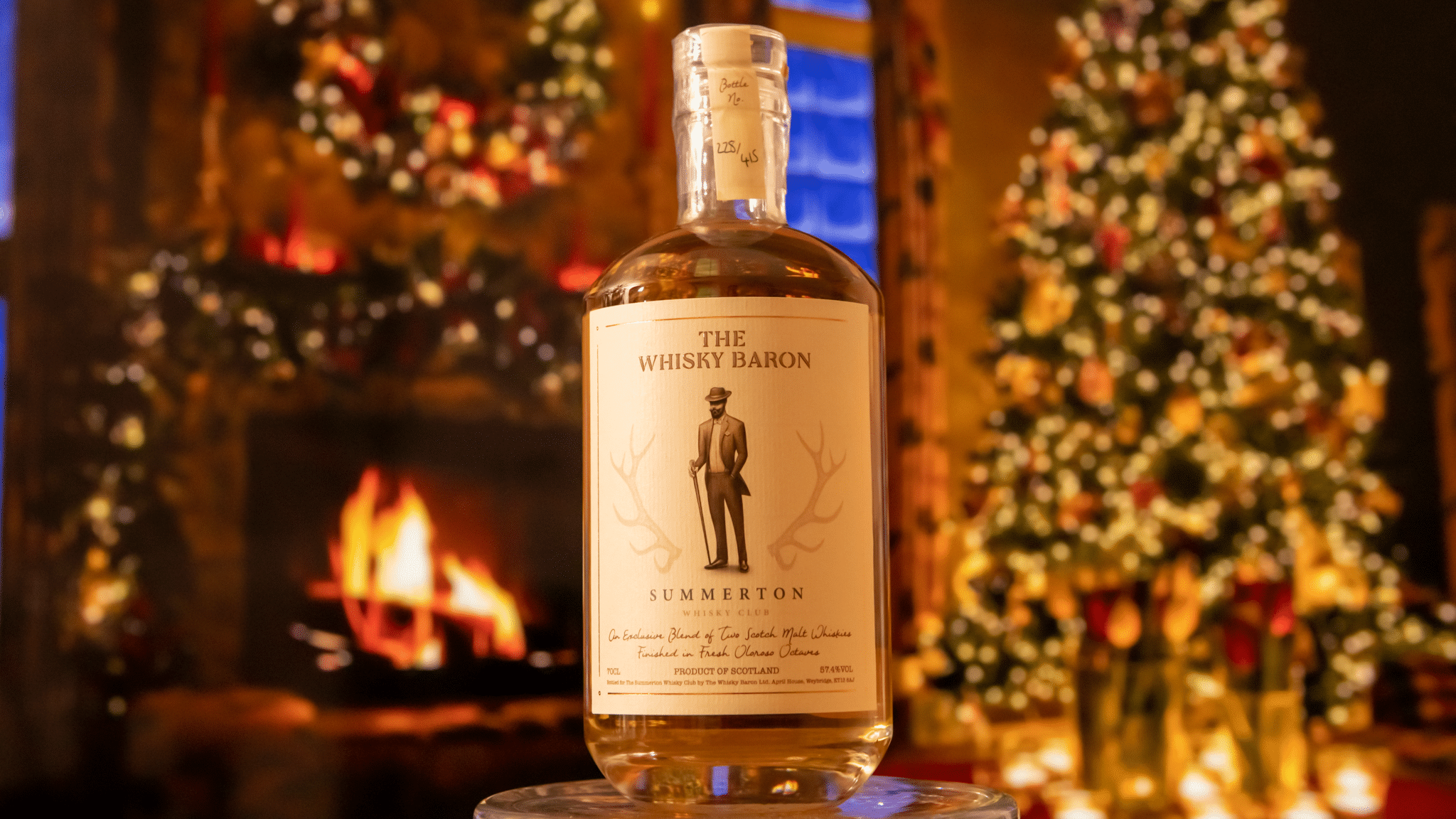 To say we were a little bit excited about our December Club Bottle would be an understatement. In a process which began much earlier in the year, we have achieved something of a dream in having our very own whisky bottled – exclusively available to club members, and limited to 415 bottles. The concept was borne following a chance meeting with Jake from The Whisky Baron at the Summerton Whisky Festival earlier in the year. We cherry picked the perfect cask with Jake’s help, and were all set to finish an 8 year old Glenfarclas single malt (bourbon cask) in fresh Oloroso Octaves… in the meantime, and literally in the course of around a week, our membership increased dramatically (thank you, by the way, to all our new members and our existing members for their support). Growth is good for us all – but it did leave us in a position whereby a single cask would not be enough to cater for everyone. We made the decision to source another cask, blending the two before finishing. With Jake’s expert guidance, we decided on a cask of five year old Benriach (sherry butt).

Fast-forward a few months, and club founder Dan finds himself in Scotland, pulling the plug on our Oloroso casks ready for bottling (and most importantly, tasting!)

Watch the fantastic film from The Whisky Baron film running through our journey:-

Tasting notes from The Whisky Baron

When we were preparing for this release, we did hit a bit of a bump in the road in September – Dan’s subscribers jumped by over 100 people in less than a week! This left us with the challenge of coming up with a new expression so as everyone would receive the same bottle and whilst it’s not what we had originally planned, I’m very excited to present this dram to you.

The whisky that we have bottled is a blended malt consisting of two single malt Scotch whiskies from the Speyside region. We started with an 8Y/O Glenfarclas matured in a bourbon barrel and added a 5Y/O Benriach from a sherry butt before marrying the two casks together in five Oloroso octaves to produce a small batch whisky consisting of only 415 bottles.

Bottled at 57.4%VOL, I’m given to understand that this is one of the harder hitting expressions that you have tried and so first and foremost, I must advise that this is a sipping whisky! I urge you to try it as is before slowly adding drops of water to open the spirit up to a level of your liking.

The interesting thing about this dram is that from nose to palate to finish, you’re experiencing a range of different notes and a couple of surprises. For me, the nose has a youthful prickle at the forefront with notes of hay, cinnamon and brandy cream coming through. There are also faint notes of orange in the background. The palate is full bodied and robust with summer fruits, baking spices and walnuts all at play. I was expecting the youth of the spirit to come through more on the palate given what the nose has to offer, yet the Oloroso octaves have rounded this element off nicely leaving you with a spicy finish of cloves, cinnamon and stewed apples.

Members will have undoubtedly noticed that each bottle is hand numbered; The Whisky Baron will be using these numbers as raffle tickets and will announce three winners over the Christmas period!

About The Whisky Baron

The Whisky Baron is an independent bottling company that launched in April 2019 with single cask expressions from Fettercairn, Glenrothes and Bunnahabhain. To complement and enhance their impressive range of whiskies, they focused their brand around ‘experience’ with a purpose  designed to create a wider whisky drinking community that is better informed and not afraid to experiment and try new things. Their revolutionary AR app brings their labels to life with a fun and interactive approach that offers consumers an insight into their whisky with distillery information, cocktail recipes, food pairings and more!

The Whisky Baron will be expanding their range with the launch of a super premium line ‘Renaissance’ along with further expressions released under their ‘Founder’s Collection’ in the new year, however, they are incredibly excited to have collaborated with Summerton Whisky Club for our December bottling. This is the first time that Summerton Whisky Club has had an entirely exclusive expression and we hope that you enjoy drinking it as much as we enjoyed preparing it for you!

For something extra special…

Hopefully our December Club Bottle, along with all those pictured below, gives you some kind of idea as to just how dedicated we are to providing exceptional value for money and finding truly incredible whiskies for our members. Our next delivery will be in February – and there’s nothing to pay until February 4th, so join us today and let us deliver a memorable 2020!

If you’d like to join the club, please click here. We also offer gift memberships if you’d like to have bottles delivered to friends, family or colleagues.